Asia-Pacific Region: Detailed overview of the fastest-growing gambling market of the world

The gambling industry is one of the most flexible sectors of the modern world economy. This industry not only demonstrates the growth and high rates of return on investment but also introduces unique innovative trends that are in many ways ahead of even the most positive experts’ assumptions.

Online gambling business magazine Login Casino has prepared an overview of the fastest-growing market of the world in the gambling industry and the reasons for its quick development, as well as future forecasts.

The following diagram shows data on the amount of money received by gambling operators in the world from 2001 to 2019. 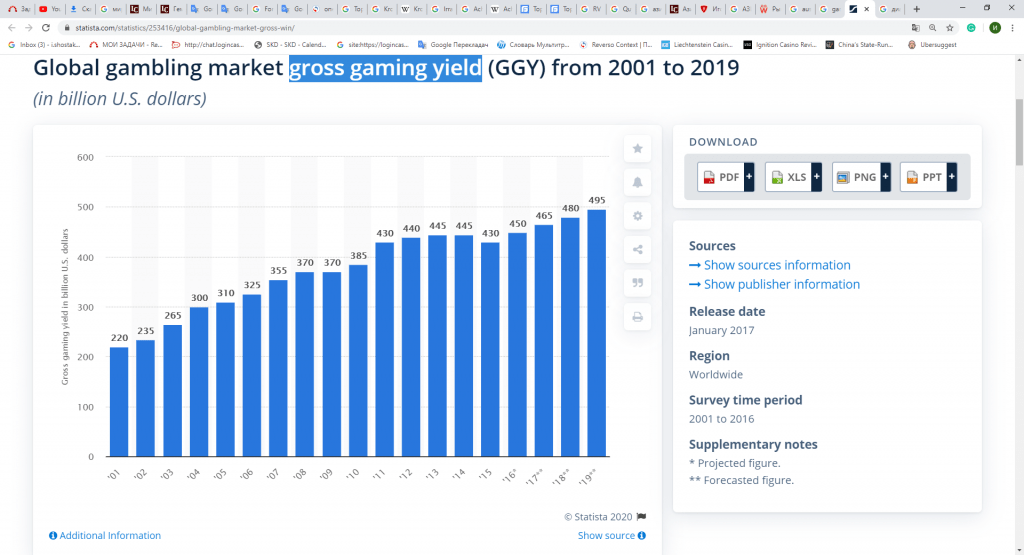 According to experts’ predictions, the world gambling market will continue to evolve. Modern technologies contribute to the improvement of gambling services, which makes this activity even more attractive and accessible to users. The growth of the market is facilitated by the use of mobile phones, which entails the emergence of programs and applications for phones; improvement of the level of welfare, which allows people to spend more money gambling; as well as expenditure of the Internet coverage. 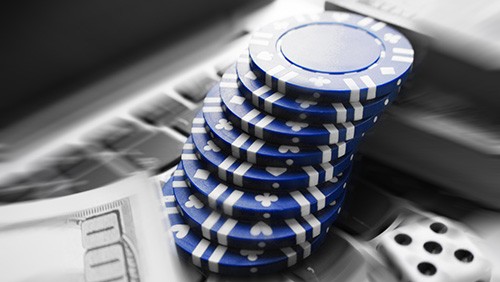 According to the experts’ reports, at present, the fastest-growing market in the world is the Asia-Pacific region. In general, the Asian-Pacific market has a tendency to increase gambling revenues, as well as the spread of legalization. Nowadays, countries with legalized gambling make huge profits, and in states where gambling is illegal, offshore casinos are very popular. Below, we will take a closer look at the major countries in the gambling market of the Asia-Pacific region.

In general, gambling in China is illegal. Residents of the country can try only one gambling activity, the operator of which is the state itself – the lottery. As for other activities, involving betting, they are held in two gambling zones – Hong Kong and Macau.

In Hong Kong, it is possible to try four types of gambling: mahjong, lottery, betting on races and betting on football. The Hong Kong Jockey Club has a monopoly on both types of sports bets and brings one of the highest levels of profit from horse racing in the world. In total, there are six legal gambling establishments in Hong Kong.

The above-mentioned activities are held in more than thirty gambling establishments located in Macau.

Macau is usually called Asian Las Vegas: its casinos generate an annual income of more than thirty billion dollars, which is a few times more than the income from casinos in Las Vegas. The absence of a tax on winnings in Macau makes this region a favorite among serious gamblers. As can be seen from the above chart, the gross gambling revenue in Macau fell sharply from 2014 to 2015. The drop in income was most likely caused by the government’s efforts to tighten control in order to combat corruption and money laundering. This also led to an increase in the number of Chinese tourists visiting the Philippines and Singapore. Then it continued to decline gradually from 2015 to 2016. However, in 2017, the revenue grew by almost twenty percent, and in 2018, gross revenue from the casinos increased by 35% – this has been the largest increase since 2014, so we can say that the market has recovered.

Gambling in Japan is strictly regulated. Earlier, the Japanese government approved the legalization and regulation of three integrated resorts, which will be the first casino sites in the country. Now it is still unknown in which cities the casinos will be located. However, according to predictions, these cities will be Osaka, Tokyo and Yokohama.

The government hopes that resorts will increase foreign investment and tourism revenues. Due to concerns about addiction to games of chance – about five percent of Japanese people are affected by it – casino visits will be limited. Entrance fees of $74 will be charged for locals and foreign tourists. In addition, it will be allowed to visit the casino no more than ten times a month.

It is noteworthy that gambling in South Korea is oriented almost exclusively to tourists. Citizens of this country have access to the one and only gambling establishment – Kangwon Land Casino located in a picturesque mountainous area on the site of mines. In order to get to this place from Seoul, people need to spend approximately three hours driving the car, and the journey by train takes even more time – five hours. However, local players are not afraid of such difficulties – even on a weekday, this gambling establishment is full of people.

The South Korean authorities are trying to avoid the problems associated with the gambling business. For this reason, all other gambling establishments in the country work to serve foreigners – the country’s citizens will not be allowed to enter their territory. The main stream of gamblers goes to South Korea from China, whose residents are frightened off by high stakes and entrance fees to Macau; as well as from Japan, where a lot of types of gambling are prohibited.

The following chart provides information regarding gross gambling revenue in the country from 2012 to 2019. 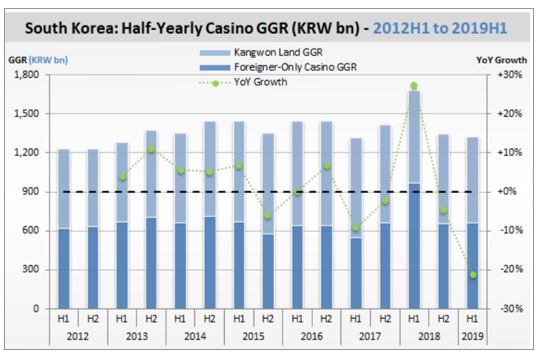 As it is possible to see, in the first half of 2018, the gambling industry in South Korea featured the highest revenue after the country managed to establish better relations with China. In 2017, Chinese authorities introduced a partial travelling ban in response to South Korea’s deployment in 2016 of a US-backed THAAD missile system in retaliation for the North Korean aggression.

The Asian gambling industry has always been associated with the bright lights and resort casinos of Macau. Despite the fact that China is certainly considered the largest gambling market in the region, other Asian jurisdictions are gradually coming to the fore with new opportunities for operators who want to find their place in the gambling industry.

At present, the gambling industry continues to grow and develop in Asia-Pacific, so everyone is focused on its new perspectives. At the same time, many people do not understand what are the reasons for the quick growth of the gambling market in this part of the world.

It should be noted that there are several reasons why the Asia-Pacific region is nowadays a leading one in the gambling sector. The first reason is large populations of some Asian countries such as China and India. Residents of Asia, whose total number is 60% of the world’s population, have already shown a special tendency to gambling.

The second reason is that this region includes a few strong world economies, among them – China, India and Japan. Taking into account this fact, a large number of successful companies are ready to make investments and develop their business there.

Asia-Pacific has established itself as a leading region in the gambling sector and brings a significant part of the global gambling revenue. Certainly, like any other region, it has a number of characteristics, which will be discussed below.

The most popular games represented on the market

The following figure represents the approximate results of the 2019 world game market per region with year-on-year growth rates: 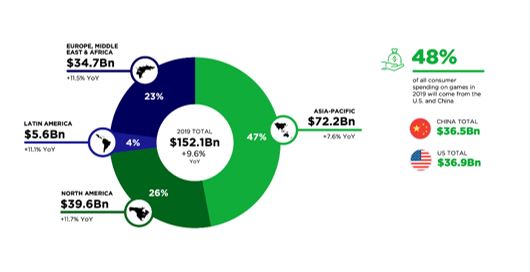 No one can doubt that the Asia-Pacific region is the most successful one in the gaming sector of the world. In this region, the fastest-growing markets are the emerging ones such as India and the South East.

As for the most popular games represented on the market, similar to other regions of the world, here you will not find homogeneity in the Asian-Pacific countries. That is why, in this case, it will be better to consider the countries separately.

At present, the Asia-Pacific market is the largest one for console games and it is expected that the region will remain the leader in this regard in the future. The main driving force for this segment is the rapid growth in the number of active players in Asia-Pacific.

There also has been a rapid increase in the tablet/mobile gaming sector due to the introduction of new tablets and smart phones featuring better options for playing video games. In fact, players appreciate a lot the ease of utilizing mobile phones in diverse cases such as Internet use and messaging. Nowadays, mobile games are extremely popular in India and China.

PC gaming also attracts a lot of players in the Asia-Pacific region. In Korea, for instance, there are many special gaming rooms where players can try numerous games. In addition, Japan is home to well-known companies, which contribute considerably to PC gaming revenues.

In the Asia-Pacific region, a large number of successful game developers are represented on the market. Some of the most popular games studios are the following ones:

The Asian-Pacific market is thought to be among the most favorable regions for the popularization and evolvement of the gambling sector in the world. Experts contribute this to the high population in the region and the rapid economic growth of some countries. Over the recent period, the gambling regulations of a number of the Asian-Pacific states have been positively changed towards the partial or full legalization of gambling. This undoubtedly opens up new perspectives for the industry. According to experts’ forecasts, the Asia-Pacific gambling sector will show annual rapid growth until 2025.

One of the events that are thought to have a positive impact on the industry in the region will be the Olympic Games that are planned to be held in Japan this year. This has become one of the main reasons for the legalization of gambling in the territory of the state. The country’s authorities are convinced that these measures will draw on a significant influx of finance into the local budget.

What does this mean for game developers?

It is anticipated that the growth in the income of the people who live in the region will result in larger amounts of money spent on digital games. This, in its turn, will increase its adoption and usage. Thanks to the improvements in the field of technology, market growth will be strengthened.

Besides, the authorities of diverse states in the region constantly intervene in digital industries and encourage the involvement of game developers since digital gaming has turned into one of the most considerable aspects of their digital economies.

Therefore, taking into a favorable situation in the Asia-Pacific region, we might forecast that a large number of companies will try to enter this market.